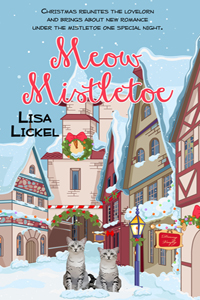 About the Novelette
Ivy has just cause to be wary of men. Her long-time fiancé backed out of their wedding. The slow fizzle of their undramatic relationship leaves her wondering if romance is a myth. Then, Adam, an intriguing new member of her pet organization, catches Ivy’s attention. Unfortunately, his cat Isis, a beautiful purebred Egyptian Mau, prefers to pick on her cat, Memnet. Ivy would like to get to know Adam better, but with her self-esteem in the gutter and feline fights at every turn, she wonders how to proceed.

When Ivy agrees to help a clingy friend find her missing pet, she learns that true love doesn’t need theatrics. There’s hope for Adam and Ivy, if only their cats would approve.

$2.99 EBook
89 pp
Buy at your favorite electronic book outlet or from the publisher