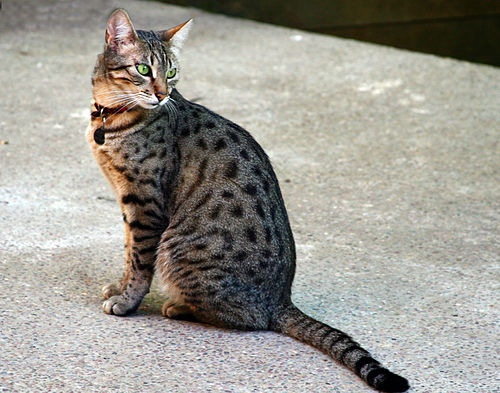 Egyptian Mau cats are the only spotted domestic breed of house cats. They are reportedly traceable back to the time of the Pharaohs, thus their name, and were highly praised, even mummified.

There are three accepted types of Egyptian Mau: the bronze, the silver, and the more rare smoke. The cats were introduced to the United States by an Italian cat fancier in the mid-1950s. In 1980, a line of breed from India was introduced to expand the gene pool. A blue has been added since 1997 to the Cat Fancier’s acceptable breed list.

Maus are short-haired, with large ears and gooseberry green eyes. Their markings include facial striping which breaks into spots along the pelt. They average 6-12 pounds for females, and slightly larger for males, making them average size. Their lifespans are typically an average of 12 years, and they are generally healthy when well cared for with little heart or lung issues since the introduction of a secondary line

The cats are reportedly family-friendly and very loyal. They prefer to be individuals, but tolerate other animals.

They rarely make a purr or loud meows typical of other cats, but instead chirp in a high pitch, or chortle, and can make a wheezy intermittent purr of contentment. They are very fast runners and can leap as high as six feet.

For articles that discuss in depth the breed and its particular characteristics, please visit the Cat FancierAssociation website with its accompanying articles.

Wikipedia is another source.

The photograph of a bronze Mau is courtesy of Creative Commons. This image was originally posted to Flickr by Muffet  t https://www.flickr.com/photos/53133240@N00/2765391874. It was reviewed on 24 October 2009 by FlickreviewR and was confirmed to be licensed under the terms of the cc-by-2.0.