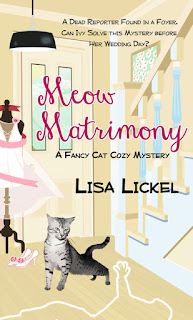 
Ivy Preston has waited a long time to get married. This time she plans to do more than make it to the altar. But when Ivy tries to do a good deed and stumbles over a body, she and her former fiancé, Stanley, are accused of the crime. Ivy hopes she’s not the only one who believes in their innocence.

Worse than being framed for murder, when one of her beloved kittens falls ill, Ivy must face her greatest fears. How will she ever parent a child if she can’t even take care of a cat. . .and for that matter, how will she be the type of wife her devoted fiancé needs?

Through the love and support of her mom, fiancé, and friends, Ivy is determined to clear Stanley's good name, and her own. With nuptials looming, Ivy hopes not only to find a killer, but to make it to her own wedding.