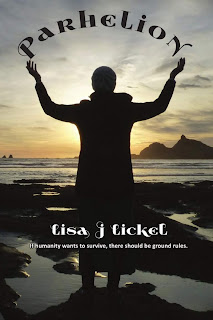 If humanity wants to survive, there should be ground rules.

From the back cover
New from Lisa J Lickel, book 3 in the Forces of Nature Series
Science Fiction/Alien Encounter/Romance
Inspirational

Maeve Michels hit earth hard, falling in love with a former Air Force test pilot. No longer in the military, Harry Kane’s mysterious work as a consultant for a space engineering company piques Maeve’s interest. Maeve’s sixth sense says there’s more to Harry than he’s telling her, but with the world about to fall apart, she must decide to trust him with her future. Harry is keeping a secret from Maeve—he has to, or his one chance at being a real hero goes up in flames with the rest of the planet. His assignment: get her to join the program, and him. Hopefully willingly.

With war no longer empty threats and posturing, Maeve and Harry are about to take part in the most important experiment in human history. Bigger secrets threaten not only their survival but their fragile co-existence with the cosmos.

If you could choose, what kind of a world do you want to live in?

Visit these links:
Reader's Discussion Guide
What is Parhelion?
Read an Excerpt