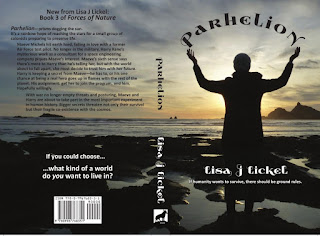 1. Family is an important part of Maeve’s life. Who does Maeve identify as family? How does the theme of family play out in the novel?

2. Harry seems to be alone. Who does he identify as his family? What were some similarities and differences between Maeve and Harry’s concept of family?

3. How did Maeve use her personal strengths and weaknesses in the tests she took for Harry’s study? Did you think about how you might have answered some of the questions?

4. What was Harry’s biggest secret? When did you suspect there was more to the situation than described at the compound? Who were the Earthers? Is there a similar group you can identify today that might rise to power?

5. What role did Roarke play? Would you like him for a friend? How did he see himself in this story?

6. If you were Maeve, how long would you have lasted in the compound without asking more questions? Why didn’t she try to force someone to explain what was going on? Why did she stay?

7. Would you have been interested in living in an experimental compound like the ones portrayed in this novel? Have you or know someone who has lived in a purposeful community? Why or why not would you like to try a communal lifestyle?

8. How was Maeve’s past relationship with Chandra important to the story? (The two of them met in Meander Scar.)

9. How did each of the principal characters react to the Ceticians? What might you have thought or done if you met them?

10. Did you identify with one character more than another? Did you have a favorite, and why? Did anyone surprise you? Disappoint you?

11. The O’Leary situation is tragic on many levels. What was your reaction to the choices that were made? What alternatives did you think of?

12. The compound founders decided on two factors to govern their society: respect, and helpfulness. How might those qualities serve as a standard but also be abused? If you were building a society, what would you teach as grounding principles? How might those principles work and not work?

13. Would you have been part of the group who left Earth or who stayed? Why or why not? What, ultimately, do you think the people of the experimental compound society achieved?