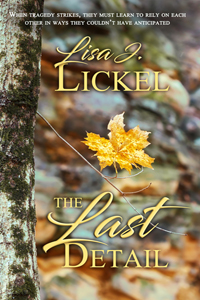 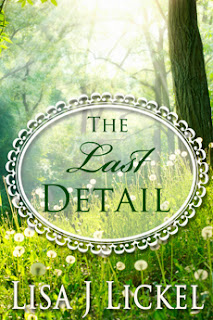 
From the back cover:

Hope, love, and loss meld two polar opposite personalities. How long can they keep passion for their ministry and each other after the wedding?


Medical missionary and avowed bachelor Merit Campbell is wounded during a skirmish at his Mideast clinic and sent home to recover. Restlessness propels him to explore the happier moments of his childhood in Illinois where he meets Amalia Kennedy, owner of The Last Detail, who enjoys helping people prepare for their final years. Merit ushers in new life; Amalia ushers it out. Love? Obviously. Marriage? Check. Dealing with the family closet? Step back…


Amalia enjoys her predictable life in a quiet little Illinois town—until long-time intended, Hudson, finally proposes in a way that shows her boring and old are coming way too fast. When a mutual friend introduces Merit and Amalia, the spark of attraction makes Merit reconsider his bachelorhood. When he can’t return to the mission, he accepts a call as pastor to Amalia’s church. As the two grow closer they weather constant interruptions from ministry, business, and family, even at their wedding and beyond. When tragedy strikes, they must learn to rely on each other in ways they couldn’t have prepared for.


Seven seconds. Merit counted silently from the time the last missile whined past his ear. Senna’s goon needed seven seconds to reload. Merit ignored the flash on his right and kept his eyes on the child who sat in the dirt about a dozen long steps in front of him, waving her tiny fists.
After the next barrage of fire went silent, Merit took off in a crouching run, grabbed Tangra’s youngest granddaughter, Mardra, and rushed toward the nearest pile of rocks. The punch and stabbing sensation in his left shoulder, followed by a thud, let him know he had almost made it. As he was lifted off his feet, he thrust the child he’d delivered last spring into her father’s outstretched arms. As gravity reclaimed him his left foot plunged between stones. His ankle twisted viciously as strong hands pulled him to relative safety amongst the band of defenders.
The child began to scream when her uncle fired his weapon close to her little ears. Merit felt like doing the same as his ankle thrummed and ground with his every movement. Broken, at least. No competition for the shoulder wound. He took Mardra back into his arms so her father could aim his US-made hunting rifle, meant for small game—not humans—back toward Senna’s position.
Merit hunched over the little girl as a brilliant flame arced overhead. A ground-shaking explosion followed, then smoke and men’s shouts and the acrid scent of the rocket’s accelerant. He hoped he wouldn’t have to run, because he couldn’t. Nothing he could do but pray between the throbs of searing pain and deep anger at Senna.
The baby wiggled, tugging Merit’s heartstrings away from his fury. It wasn’t her fault her grandfather’s rival destroyed Merit’s life work. Both factions were going to miss the little missionary medical clinic Merit ran in the mountains of Nehrangestan, a tiny spot on National Geographic’s map of Asia.
Something tickled. Wha—oh, right—blood from the shoulder wound. He touched the front of his blue shirt then looked at the growing red stain flowing like a waterfall. Tentatively, he reached behind his collarbone and hissed at the gouge. Not serious. He’d probably get a nice scar out of it. Senna’s pound of flesh. Merit shifted the baby and tried to flex his ankle. He bit back a scream and panted while sparkles pulsed in the fringe of his vision. Yeah, broken.
Well, that answered that question. If he got out of here alive, the mission board would make him go home for treatment. Question was, how soon could he get back to rebuild the clinic?

More about the Book:

Where did the idea come from for the book?
Several years ago I met my friend Ruth halfway between our homes for a weekend catch-up and getaway--this happened to be at Peru-LaSalle, Illinois, and one of the parks we visited was Starved Rock State Park. It had such a neat history, as well as the gruesome story of a murder in the 1950s. A local author wrote about this murder, and for me, the idea morphed into what would happen when people die who have no family to clean up after them? The fictional business The Last Detail was born. The story takes place in this area, in a fictional community, of course, called Fox Falls, and uses Starved Rock State Park often.

What is the one sentence synopsis of your book?
Marriages made in heaven should be perfect, right?

What other books would you compare this story to within your genre?
I think a little of Cynthia Ruchti's book, They Almost Always Come Home, which is also not a genre romance, but of rekindling what was lost. Contemporary is hard to categorize, because although there's love and romance in there, the story is more about keeping it alive after, and I think that's what makes for good conversation.

Who or what inspired you to write this book?
I wanted to talk about marriage--the way men and women perceive each other while they're getting to know each other; how we think we're doing God's will when he has other plans in mind; how even after we get what we want, it's hard, hard, hard work making marriage be the blessing it's meant to be. Sometimes we're so busy doing for God or following our own path, we forget to take time out for each other.

What else about the book might pique the reader's interest?
The characters aren't based on my oldest son and his wife, but it was interesting that I was writing about a missionary who never planned to marry, which was something my son's wife had thought about in her life at one point, and a young woman who was very safe in her own little community, with no desire to change anything; again, not describing my son in particular as he’s quite adventurous, but they complement each other, as do my main characters. 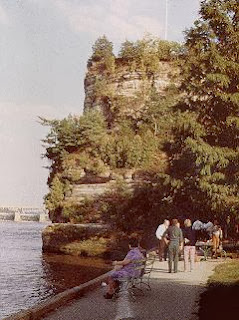 The Peru-LaSalle area of east central Illinois along the Illinois River has been inhabited in some form for 8,000 years. French explorers claimed the region in the late seventeenth century and built Fort St. Louis atop what became known as Starved Rock. The French and Indian Wars eventually led to the abandonment of the fort after only about twenty years of occupancy. Illiniwek, Potawatomi, and Ottawa people lived in the area during this time. The legend that named Starved Rock came about in the 1760s when Pontiac, the chief of the Ottawa, was killed by the Illiniwek chief, Kinebo, during a tribal council. To avenge the killing, the Potawatomi and their allies the Ottawa drove a small band of Illiniwek up the 125-foot sandstone bluff and refused to let them down. The Illiniwek starved to death.


The beautiful lodge and conference center at the park is indeed available for rentals, including weddings, and is on the National Register of Historic Places. It was built in 1939 and is open year round.


The inspiration for The Last Detail came in part from the Starved Rock murders on March 14, 1960. Three women friends from Riverside, Illinois visited the park for a vacation. They registered, had lunch, and told the caretaker they were going for a hike. Their bludgeoned bodies were found some days later, after a freak snowstorm, and after one of the husbands had been unable to reach his wife. A local man who had been implicated in other attacks was eventually arrested and imprisoned after a sensational trial.


One the friends had recently lost her husband. I wondered what would happen to a murder victim, or anyone for that matter, who had no one, no family, to care about the final details of life. This idea became the framework for The Last Detail.


Visit the following websites for more information, as well as take a virtual tour:
www.dnr.state.il.us/lands/Landmgt/PARKS/I&M/EAST/STARVE/Park.htm
www.starvedrockstatepark.org

For Reflection or Discussion


The theme of The Last Detail is relationships. What kinds of relationships are described?
Who were the main characters and the secondary characters? How did they interact?
Merit and Amalia had choices to make which affected not only themselves but others around them. How did these choices change during the stages of their relationship?
Both the Illinois and the overseas settings were fictional, but near real places. How did they play into the theme of the story? What did the story of Starved Rock symbolize?
What other kinds of symbolism were used in the story? What cultural and social customs affected the relationships and the events?
Why do you think Merit’s brother-n-law, Tom, choose to keep the family secret the way he did? What would have been different if he hadn’t?
How were Merit and Amalia influenced by their upbringing?
What secrets did the characters in The Last Detail have?
Pete says in chapter eleven, “So, you think if you don’t have love, God can’t take it away.” What did he mean? What was Merit afraid of? Have you ever felt that way?
What was Amalia’s reaction to the Christmas news about Bunty? Did she have a right to feel the way she did?
Throughout the story there was a series of miscommunications that threaten Amalia and Merit’s relationship. What were some of them and how, or were they, resolved?
What did the characters learn through their courtship and marriage? How do you handle both trials and triumphs in your relationships?