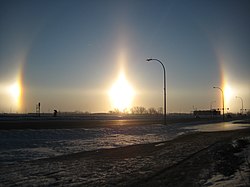 Parhelion is a meteorological occurrence. When the sun shines through ice crystals, spots or bars, often prismatic, “dog” each side of the sun. They are sometimes called a “winter rainbow.” Enough ice in the sky may cause a complete circle or arc to appear around the sun as well, or, rarely, great enough reflection to appear as if three separate suns hang in the sky.

About Parhelion in literature and Roarke’s quote
Shakespeare used a famously recorded environmental event of a brilliant and unusual parhelion occurring during the Battle of Mortimer’s Cross as the opening lines in the play Richard III.
See this article for more detailed information and pictures:

“Now is the winter of our discontent Made glorious summer by this sun of York.” ~Richard III, Gloucester, later to become King Richard III