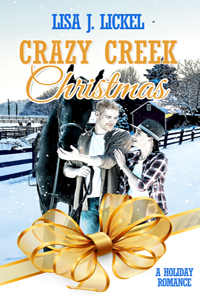 Noel thought he left the ranch and his family behind
Leah hoped to find a family she never had
Life is crazy that way in Crazy Creek, Wyoming

Psalm 71:20 NIV
Though you have made me see troubles, many and bitter, you will restore my life again; from the depths of the earth you will again bring me up.

Crazy Creek, Wyoming saves Leah Hanes's life. Running on fumes and bald tires, she thanks heaven for Cupcake and Jeanette Wimmer who send her to the Rocking J Ranch as a winter cook. Leah arrives to discover the ranch and the people need more than a cook.

Noel Johansen, heir of the Rocking J, happily left for the big city years ago. When he loses his family in a terrible accident, the best thing for everyone is to sell the place, ditch the memories, and move on. But his brother-in-law has other plans, and the beautiful new cook they've hired for the season threatens Noel's desire to remain detached.

The ranch represents Noel's future and selling it becomes more important than ever when one more tragedy leaves him with nothing. But memories can't be bought and sold, nor can a broken conscience heal itself. Home, heart, and future are irrevocably tied in Crazy Creek.

How Crazy Creek Christmas came about

I am often asked about my writing schedule, told I need to be dedicated to my work like any other nine to five job, and scolded when I share the truth. I don’t have a schedule. I carve out time from my life to write. I have kids, grandkids, a husband, and parents who make legitimate demands on my time, as do my friends and church and community, and business clients. If I wanted a nine-to-five job, I wouldn’t be able to have my writing career. Case in point: My husband I were on our way back from a late summer visit to the Bighorn Mountains and Yellowstone National Park when my editor called. The holiday novella I wrote two years ago, the final book of a trilogy of which the first book was published three years ago, was going to be out of order since the second book wasn’t going to be released until 2020. Could I write another? Quickly?
Well, sure. I’d just been out west, and had been noodling an idea for a western novel. If I had to follow a schedule, I wouldn’t have been able to produce a 23,000-word novella a week later. For the title, I’d had an idea based on a real name which showed the hearts of my characters, but when I did a search on that title, a dozen others popped up. So I kept thinking. We’d passed Crazy Woman Creek and I liked the idea of crazy ideas, crazy lives, and tried Crazy Creek for a title, and added Christmas too it. I think it sounds pretty good, and so far it’s unique according to a global internet search.
I hadn’t tried writing a western before. I do like them, having read Brett Harte, and my favorite Zane Grey, among others. Although I live in a rural area, it’s Wisconsin, known more for cows and lumberjacks. Surprisingly, rodeos and horse shows are popular here in western Wisconsin, so I do have a little firsthand research under my belt from talking to horsey people. The trick with making settings and people believable and relatable is that you provide enough information that people recognize something universal about a place or a person in your book. My readers don’t have to have visited Wildhorse Butte to get a picture of it. I tell you Crazy Creek is south of Gillette off Highway 59, and you can look it up. Every reader knows people with deep hurts and secrets, who have been disillusioned. Some make the best of their circumstances, like Leah, who was abandoned, or so she assumed, and raised in a good enough caring foster home. But she still seeks a family of her own, and answers to why her mother left her. You want to cheer for characters like that. Others can’t seem to figure out what to do with the golden spoon they hold, like Noel, who couldn’t run from farming fast enough into the world of big business. When that world turns on him, Noel goes home with a plan. But when he arrives home to a world both different and the same, he realizes he doesn’t have to play the big man and take care of everyone else. They all need to take care of each other.
Novellas are big short stories. And like all stories, no matter how long or short, they all need a starting point, a sustainable middle, and a satisfying ending. The side stories in Crazy Creek Christmas are today’s issues: people who must adapt to being differently-abled when they lose a limb; and immigrating guest workers who have good jobs here in the States and want the chance to pay it back, as well as provide the best life they can for their families. Such issues don’t involve sides, they demand our empathy, our sympathy, our respect.
That’s a lot to pack into a quick little holiday read. I hope Crazy Creek Christmas will stick with you, and give you something to talk about when you get together with family this year.

Leah turned to the porch of the big, low, rambling log house now occupied by a scowling man piled into a wheelchair like so much pot pie dough. She squinted. Maybe it was the amount of raggedy clothing pooling around him that made him look a part of the machine. His dark hair was over long and messy, and whiskers that could have been sexy had grown too long to be a shadow, too short to be a beard.

Leah looked one last time over her shoulder at the retreating cloud of the Wimmers headed for the border—uh, Arizona—and took in a deep, steadying breath. She pushed open the gate and tried to stride confidently for the porch and, she assumed, her new boss. Temporary boss. Leah could handle anything fora few months. Cooking for cowboys had to be better than dodging lonesome long-haul trucker pinches and a boss who’d fired her for not being friendly enough. Landing in Crazy Creek while headed west from Minnesota had seemed fitting last summer. Until Cupcake mentioned he’d be shutting the café for the winter—the café where she worked baking, packing catering boxes, serving and cleaning up…and slept in the tiny back apartment. She couldn’t stay in the back of the empty restaurant, Cupcake told her. They were leaving the utilities at minimum while they were gone…unless Leah could pay…

The Rocking J Ranch a couple miles down Highway 50 happened to need a cook.

Cupcake was a liar. The Rocking J Ranch needed a lot more than a cook. Flower beds surrounding the porch were obscured by tall, dried weeds. The lawn hadn’t been trimmed in forever, and out of the corner of her eye, Leah noted honest-to-goodness movie set tumbleweeds blowing across abandoned gravel paths that wound between buildings. Dark clouds decorated the sky, adding to Cupcake’s untruth. This atmosphere did not agree with the song lyrics of the sky being not cloudy all day. A snowflake passed before her eyes, followed by a dozen more.