The Yankee Boy Chapter One 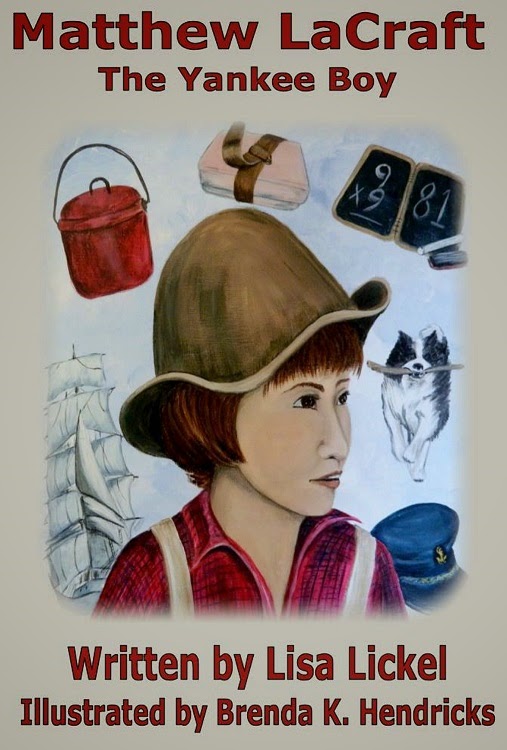 Matthew LaCraft’s father buckled the shiny gold buttons of his navy blue captain’s coat. Matthew stood close enough that he could smell tar and sweet pinesap from the last cargo of wood carried by his father’s sailing ship, the Mary Jean.

Matthew held his father’s cap while Mother brushed the shoulders of uniform.

“This won’t be a long run.” Father smiled at Mother. “I’ll be back in three weeks, the first real week of fall.”

Father patted Matthew’s shoulder instead of his head like his sisters Anne and Myrna, or kissed his cheek like baby brother George. “You can tell me all about school when I return.”

Matthew’s throat tightened as he fought back tears.

Sailors don’t cry, he told himself. He didn’t want Father to remember him with tears on his face.
“But I want to go with you on your last trip. I’m your best cabin boy. That’s what you said.”

Father leaned down to look into Matthew’s eyes. “Son, we’ve been through this. School is very important. I don’t want you to miss any days.”

“But it’s the last one.”
Mother took the cap from him to give to his father. “You heard your father, Matthew. And I need your help while he is away.”

“How can I help if I’m gone all day? Why do I have to go to school? I can read and write.”

Father’s mouth grew stern and two lines appeared above his eyes. Matthew stared at the floor.

The captain straightened his jacket. “We are fortunate to have a school. You must trust me in this. You are only ten years old. There are many things you must learn yet. And not all of them have to do with reading and writing.”

Matthew followed his father and mother outside where the horse and buggy waited. “Why can’t I go back to my old school in Boltonville where all my friends go?”

Myrna leaned over the side of the buggy. “Because Father is in charge of schools, and he built the new one, ninny.”

Mother rapped Myrna with her parasol handle and climbed into the buggy. “Myrna. Young ladies do not use such language.”

“I was one of many who helped Father Henni build the school,” Father said as he took the reins.

“You are certain you don’t want to come along, Matthew?” Mother looked a little worried.

Matthew loved the docks and ships at Port Washington, the big shipping center on Lake Michigan. But he was too sad and mad to watch his father leave without him.

“I can stay here with Carson and help him fix the fence. I’m too old to go to stores with girls.”

Mother pursed her lips and opened her parasol. She nodded. “All right, then. I will ask Carson for a report on your help when I return.”

After waving good-bye, Matthew kicked the wooden carriage steps in front of his house, then sat on the top one.

He closed his eyes, and pretended to watch masts of the clipper ships and other boats in the harbor of Lake Michigan. Father planned to sell the Mary Jean after this trip. He said she couldn’t keep pace with the new steamers.

They all would stay home and farm. Why would anyone want to be a farmer when he could pilot a tall ship on the Great Lakes?

Matthew walked across the road to their barn where he heard Carson, their hired man, hammering on the new fence. Striped cats stretched or pounced on bugs. Some took naps on the hay bales. His sister’s red and black speckled chickens cackled in the fenced-in yard. Matthew walked around the yard with his hands shoved in his trouser pockets and kicked an old, dried corncob. Prowler the dog barked and jumped around Matthew’s knees, holding a stick in his mouth, begging Matthew to play. Matthew threw it a few times.

Looking north, Matthew saw the new stone school building. His old school in Boltonville was only two miles away, not far to walk at all.

This new school was one-of-a-kind, Father had said. He and the other neighbors helped build it.
Prowler held out the stick again. “Prowler, sometimes I just wish I was like you and could play all day.” Matthew threw the stick hard in the direction of the school.

Just beyond the school were the fires from the Potawatomi camp, where his friend Green Leaf lived in his summer tipi. In the winter, the Potawatomi scattered into the forests to live in bark-covered hogans and hunt and trap.

“I wish I could go with Green Leaf in the winter and live in a hogan and not ever have to go to school.”