The Irish Girl Chapter One 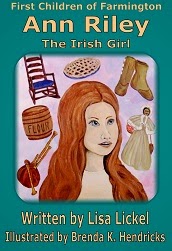 The Irish Girl
Chapter One

The neighbors all knew young Ann Riley.
She lived with her mother and father and her big sister, Catherine, four uncles, two aunts, and a grandmother on a big, high hill in a big, tall stone house. It overlooked a bubbly little creek and lots of leafy trees.
“There goes Ann Riley,” the neighbors would say whenever the Rileys went to the store or to church. “She’s the first pioneer child born in town.”
Yankees came first, from the east, on wagons pulled by oxen. They bought land, then sold it to the Germans, Saxons, Prussians, French, Luxembourgers, and Irish.
Ann had a special friend whose name was Katie Murphy. Katie was Irish, just like Ann. Katie was born in America, too, but not in Wisconsin.
Ann liked to visit Katie and play at her house. Ann and Katie especially liked to listen to Katie’s grandfather tell stories.
“The hills of County Meath in Ireland were like a vast green and gray ocean, dotted with sheep, likes white waves.” Grandfather Murphy sucked on his corncob pipe and blew smoke through his round mouth. “I remember the peat burning on the hearth all winter and helping my mother bake soda bread. Father would play his pipes—oh, so lovely, so lovely.” He made more smoke come out from between his brown teeth. “If we had more wool than we needed to make our clothes, we would trade at the market for shiny spoons and sharp scissors. In winter, we’d make the baskets from the grass of the sea to take the potatoes to market. When the mist came in off the sea, we’d pretend we were with St. Patrick in heaven.”
“Now, Da, don’t be scaring the wee ones,” Katie’s mother would say as she bustled about, busy as a bumble bee.
“Ann Riley, who’s your grandfather?” Abbie Murphy, Katie’s little sister asked.
Ann and Katie were dressing their corn cob dolls in crackly corn husk dresses. “I don’t have a grandfather,” Ann told Abbie, who was only four.
“Everyone has to have a grandfather,” Abbie said.
“Well, I don’t,” Ann said. “I have Gran Ann, Papa, Mother, sisters, brothers, aunts and uncles. There isn’t room for anyone else in our house.”
“But, who will tell you stories while you sit on his knee?” Abbie asked.
“Abigail Murphy, come here this instant!” Katie and Abbie’s mother scolded. “Don’t you be upsetting the poor girl.”
“But, Mommy, who will be Ann’s grandfather?”
Ann did not think she was poor. But she did not forget about Abbie’s question.
When she got home she asked Gran Ann about it.
“Of course you have a grandfather,” Gran Ann said. “You had two. One’s no longer living on this good earth, and one stayed behind at home in Ireland.”
Ann thought about the things that Katie Murphy’s grandfather did. Ann would just have to find a grandfather of her own who was just like Katie’s.
Ann’s own grandfather would tell stories.