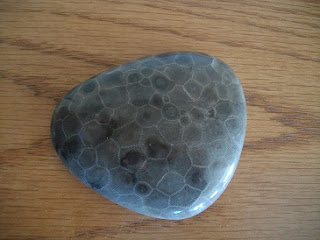 Our part of the Midwest used to be an ancient sea. For those of you who believe the earth is more than several thousand years old, this would be the Devonian period, 350 million years ago, or circa 120 million BD (before dinosaurs), when the landmasses were grouped much differently than they are today. After the continental migration, glaciers scraped surface material onto different areas, and hexagonaria percarinata fossils ended up all over western Lake Michigan, and in the western part of the state of Michigan.

Fossil hunters think they’re cool, and so do I. When the stones are dry, they don’t have the spectacular look of wet or polished samples, where you can clearly see the six-sided features of the ancient coral. After I wrote Healing Grace, my brother gave me the above polished Petoskey stone.

Here are some good articles on Petoskey stones.
From Rock Tumbler
From Michigan.gov, a pdf with good pictures explaining about the stones


From the Native Heritage Project, more information about the Ottawa and Chief Petosegay