The Cheyenne Valley is a real place in
Vernon County, Wisconsin
Read more about them here.
Visit the Cheyenne Valley Heritage Facebook page.
Visit this page for even more information.
A unique community of Wisconsin settlers were free black farmers. More than one community in western and southwestern Wisconsin is documented. These people migrated from North Carolina and Indiana—mostly “free persons of color” who settled in rural central Wisconsin from the 1850s through the 1870s. The first settler to the Cheyenne Valley community in northern Vernon County was Walden Stewart. He was born in North Carolina, a free black man, who probably came north out of fear of the Fugitive Slave Act which was passed in 1850 which said that any runaway slave, or suspected slave, had to be captured and returned, wherever they were found. Wisconsin declared the law unconstitutional and refused to legally participate. See the Joshua Glover case below

The Cheyenne Valley Heritage committee, based in Hillsboro, WI, has a wealth of information, as does the Cheyenne Valley Heritage Road Tours and several other area historical societies in Westby, and Viroqua. Although at one time a few descendants of these free black persons still farmed and lived in the community, I’m not entirely sure that’s entirely true anymore—at least about the farming part, though many people still live and farm there and are active in keeping the heritage of the multicultural community alive. Algie Shivers and his wife had no children of their own and took in and raised many foster children who now remember them with great fondness.

(See https://www.facebook.com/CheyenneValleyForestWI/) In the late nineteenth and early twentieth centuries, Alga “Algie” Shivers, a native of the Cheyenne Valley settlement, built or supervised the building of at least fifteen round barns. History says Algie probably learned the technique in Missouri at a technical school. Only a few of these barns are left standing today.

A Driftless Dialog lecture held at the Kickapoo Valley Reserve, about an hour long panel discussion by the Cheyenne Valley Heritage Committee in 2014, can be heard here. 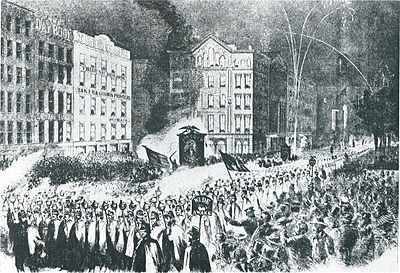 The Wide Awakes were a paramilitary organization affiliated with the Republican Party during the 1860 election and American Civil War. The Wide Awakes are believed to have been formed 1850s, and were loosely associated with the "Know Nothing" movement. Little is known about the national organization of the Wide Awakes, if indeed any formal governing body existed at all. The clubs seem to have been organized by city into local chapters. Surviving minutes of the Waupun, Wisconsin Wide Awakes chapter restrict membership to males age 18 and older. Opponents of the Republican Party and especially Southerners identified these stated purposes and the organization's torchlight tactics as forms of political intimidation and voter fraud. In early 1861 the Wide Awakes chapter of St. Louis became involved in paramilitary operations at the outbreak of the Civil War. They were used on May 10, 1861 to arrest a division of the Missouri State Militia near St. Louis. This event sparked the beginning of violence in Missouri and led directly to the St. Louis Massacre later that day.